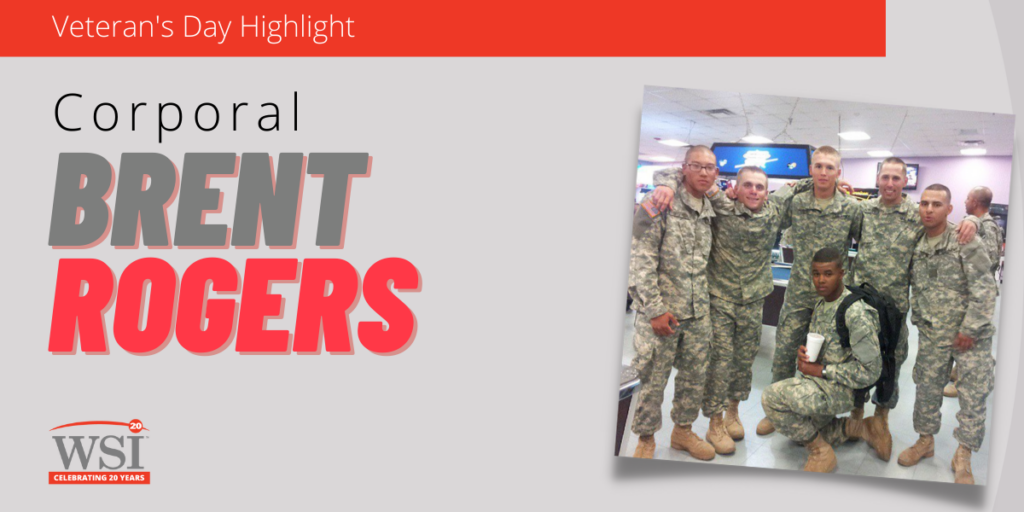 Today we recognize all veterans who have served our country, past and present. In honor of Veteran’s Day, we interviewed WSI’s own Brent Rogers (Payroll Coordinator), retired US Army Corporal, to learn more about his military experience.

What motivated you to join the military? How did you choose your branch of service?

I joined up because I wanted to serve my country and for the adventure. Both my father and grandfather served in the U.S. Army, so it was a pretty easy choice for me when I decided to enlist.

Tell us a little about your time in boot camp.

Boot camp was ten weeks long at Fort Leonardwood, Missouri. The first three weeks were pretty rough, but once you get used to the routine it wasn’t too bad. You learn a lot of things in a very short amount of time there (land navigation, first aid, rifle marksmanship, etc,) Our drill sergeants yelled and screamed a lot, but once we neared graduation they would mostly act as mentors to us. They all had served multiple tours overseas and were exemplary soldiers. One of them shook hands with me after I graduated, and I was pretty proud of that.

What was your primary job after training?

My primary job was being a motor transport operator and I was attached to a field artillery unit. Our main mission was to haul and distribute fuel and ammunition to the cannon crews.

Where did you serve the majority of your time in service?

Most of my time was spent at Fort Custer over in Battle Creek. We also spent time up north at Camp Grayling when we had a field training exercise.

What rank are you most proud to have earned, and why?

The rank I was most proud of was being a corporal, which is an NCO (Non-Commissioned Officer). NCOs are considered to be the backbone of the army. They take orders given from officers and ensure that the soldiers within their squad or team get them completed. I felt pretty proud to have that responsibility.

Which medals or citations are you most honored to have received, and why?

The medal I was most honored to receive is called the Broadsword Service Medal. It’s awarded to those who have completed four or more years in the Michigan Army National Guard. I thought it was pretty neat since it’s only awarded to soldiers who served in Michigan.

Tell me about some of the special people you met.

One of the coolest aspects of being in the army is that you get to meet people from all walks of life. One of my best friends in the Army came here from Mexico and actually got his citizenship when he was in boot camp, which is pretty cool!

What was the best and worst ‘military’ food you were served, and why?

The best meal I ever had was steak, mashed potatoes with gravy and biscuits. We were at Fort Irwin, California for a month and had just gotten back from a two-week field training exercise in the desert. It just tasted really good after eating nothing but cold rations for two weeks. The worst meal I had was powdered eggs and what looked like undercooked bacon for breakfast once. The eggs looked pretty gross because they were green, but we ate them anyway haha.

Any funny stories you experienced that could only happen in the military?

One funny story comes to mind. In boot camp, they taught us how to throw a hand grenade. You stand inside a low concrete square with an instructor, throw the grenade, and duck behind the barrier to shield yourself from the explosion. Well, this one guy in our platoon chucked the grenade too low, it hit the barrier and bounced back. The instructor grabbed the guy by his collar and dove out of the barrier. The guy got yelled at a lot and they made him run laps around the barracks when we got back later that day. Everyone thought it was pretty hilarious at the time.

What are some ways civilians can honor Veterans not just on Nov. 11, but every day?

I think the best thing civilians can do to honor those who served is to volunteer and try to become an asset to both our country and our community.

How did your military experience affect your life today?

Well, I never can sleep in past 7 am nowadays haha. All joking aside, the military taught me some pretty important values like honor, courage, and commitment. I try to bring those values to my job here at WSI.

Brent, thank you for your service and for sharing your experience!

You know how they say actions speak louder than words? WSI is an award-winning staffing and recruiting firm because we understand the power of a positive and fulfilling workplace. We live and breathe it every day, and love helping others experience it too. Headquartered in Kalamazoo, Michigan, WSI also has offices in Battle Creek, Grand Rapids, Holland, Metro Detroit, and Sturgis, Michigan, and northern Indiana.  Learn more about us at wsitalent.com.

Check out our blog for more tips on adulting, making the most of social media, hot skilled trades, interviewing, and more.
(It’s like having your own virtual employment coach— 24/7!)